US markets rallied as inflation data for July came in weaker than expected. The Dow Jones Futures rose more than 400 points, while the Nasdaq jumped more than 2%.

The consumer price index rose 8.5% from a year earlier, cooling from June’s 9.1% advance that was the biggest in four decades, data showed on Wednesday. of the Department of Labor. Prices remained unchanged from the previous month. Lower gasoline prices offset increases in food and housing costs.

The so-called core CPI, which excludes the more volatile food and energy components, rose 0.3% from June and 5.9% from a year ago. 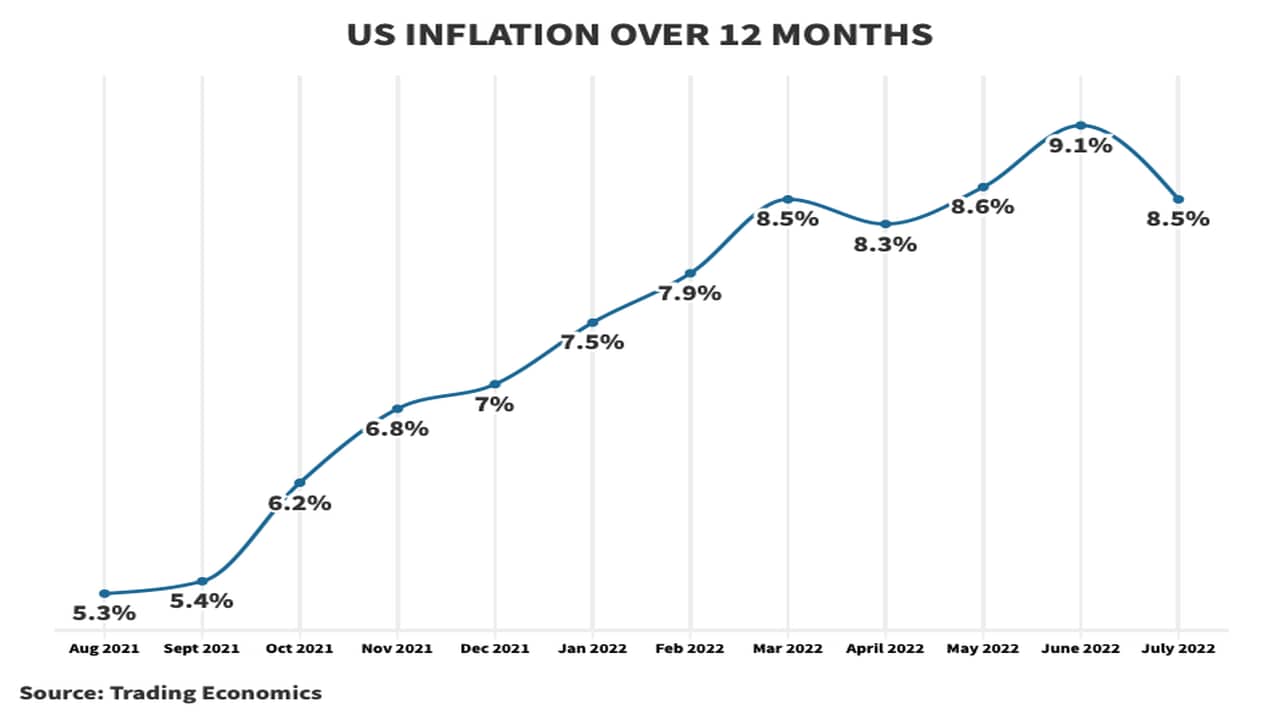 The data may give the Fed some breathing room, and cooling gasoline prices, as well as used cars, are giving consumers some breathing room. But annual inflation remains high at more than 8% and food prices continue to rise, bringing little relief to President Joe Biden and Democrats ahead of the midterm elections.

While lower gas prices are good news for Americans, their cost of living is still very high, forcing many to charge up their credit cards and deplete their savings. After last week’s data showed still robust labor demand and firmer wage growth, a further deceleration in inflation could dissipate some of the Fed’s urgency to extend hikes excessive interest rates.

Treasury yields slid across the curve as S&P 500 futures extended gains and the dollar plunged. Traders slashed the odds of the US central bank raising rates by three-quarters of a percentage point next month.

Even though inflation has slowed, Fed officials said they want to see months of evidence that prices are cooling, especially in the core gauge. They will have another round of monthly CPI and employment reports ahead of their next policy meeting on September 20-21.

Housing costs – which are the largest component of services and account for about a third of the overall CPI index – rose 0.5% from June and 5.7% from June. than last year, the most since 1991. This reflects a 0.7% increase in the primary residence’s rent. Hotels, meanwhile, fell 3.2%.

Elsewhere in leisure, airfares fell 7.8% from the previous month, the most in nearly a year.

As prices show signs of moderating, several factors are likely to keep inflation high. Housing costs are important, as well as unexpected supply shocks. And wages are still climbing at a historically rapid rate, concerning some economists of a so-called wage-price spiral.

However, these gains do not keep up with inflation. A separate report showed real average hourly earnings fell 3% in July from a year earlier, falling every month since April 2021. The impact of inflation on wages has started to weigh on spending , with the pace of personal consumption growth slowing between the first and second. quarters.

That said, consumer expectations for inflation in the United States have fallen sharply in the latest New York Fed survey, suggesting that Americans have some confidence that prices will come to a halt within a few months. at five years old.

With contributions from Bloomberg

S&P and NASDAQ trade towards new highs in session