Craig Halkett and Ross Stewart have received their first senior call-ups in Scotland as David Marshall and Scott McKenna drop out of Steve Clarke’s side for the March double-header.

The pair join St Johnstone goalkeeper Zander Clark in entering the squad with Scott McKenna and David Marshall ruled out.

Halkett has impressed for Hearts this season in defense as Robbie Neilson’s side close in on a third place in the Scottish Premiership.

Stewart has been in fine form for Sunderland this season, scoring 22 goals in the English League One.

The Black Cats – sixth in the table and in the play-offs – are in contention for promotion to the English second tier.

“The star of young players in European football”

Aaron Hickey, 19, is another debutant in Steve Clarke’s double-header squad after appearing in 26 games for Bologna in Serie A this season.

Despite being left out of the U21 squad for the upcoming Euro 2023 qualifiers – and not being capped above U17 level – the youngster could be set to get his chance under Clarke .

“If you look at the course of the season and the way Aaron has played for Bologna, he is one of the most outstanding young players in European football at the moment,” Clarke said.

“It’s a chance for me to bring him into the team to see him, compare him to the people who are in the team – his competition if you will and he has big competition ahead of him.”

Rangers midfielder Ryan Jack returns to the squad after a long injury, but despite his impressive form for Newcastle, Ryan Fraser is out, as are injured Hibs duo Kevin Nisbet and Leeds defender Liam Cooper.

Scotland will face Poland in a friendly match at Hampden Park on March 24, with £10 from each ticket sold going towards UNICEF’s emergency fund for Ukraine.

The match replaces the World Cup play-off semi-final against Ukraine, which was postponed to June due to the ongoing war.

Clarke’s side will then face the loser of Austria or Wales, who meet in Cardiff, in an away friendly five days later. 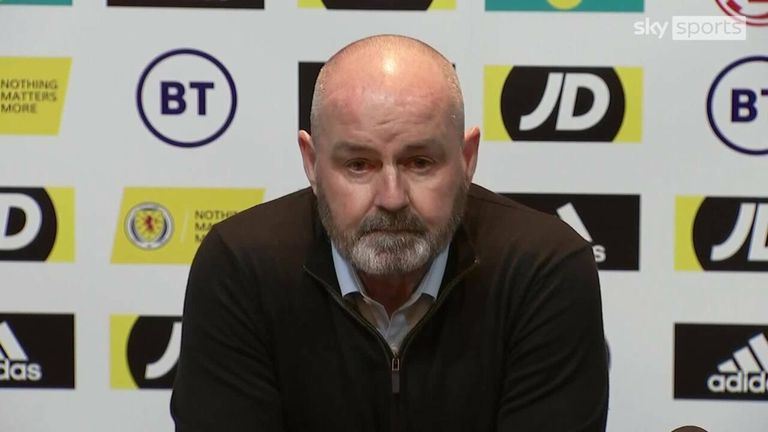 Scotland head coach Steve Clarke has said his side will be unable to play six matches in June with World Cup play-offs and Nations League fixtures to go ahead and discusses of his team for the March double header.

Scotland boss Clarke doubts his side will be able to play six games in June with World Cup play-offs and Nations League fixtures scheduled.

“I think the window is already set for four games, it’s a pretty busy schedule anyway,” he said. “If they can find enough space in the calendar to make more dates available and play five games, I don’t know. Six at this stage of the season where the players have had a long and difficult season with their clubs, they need rest in summer.

“It’s going to be difficult for us, but these are football issues, it’s very, very important, we don’t forget the human issues. Everything takes a step back from the situation in Ukraine at the moment.”

“At the moment there are a lot of discussions going on, most of which are above my head. All I can tell you is that at this stage negotiations are continuing to try to look at all the different kinds of scenarios. The most important thing for me is I hope and pray that we can play against Ukraine in June. If we can do that, it means the situation will be much better for everyone the world.”

Fraser apologizes for controversial withdrawal | The shape will dictate the selection

Fraser pulled out of the Scotland squad in November for crucial games against Moldova and Denmark with a calf problem but was later pictured at the Newcastle training ground.

The winger has been in good form for the Premier League club and although Clarke didn’t choose him this time, the door is open.

“I had a conversation with Ryan,” Clarke said. “There was a situation in November where Ryan didn’t come with the team but trained with his club. Ryan apologized for that situation, I had a good chat with him.

“I have decided not to choose him from this camp and we have agreed that Ryan’s club form going forward will determine whether he will be involved in any future camps to come. It is up to Ryan to decide how he plays for his club.”

IPL 2022 | This year has been a bad phase for me but will make a strong comeback, says Mohammed Siraj