An interview with Motherwell Assistant Manager Chris Lucketti, by Callum McFadden for Wireless.

You’re Graham Alexander’s assistant manager at Motherwell. How would you sum up your experience of Scottish football so far?

“We really enjoyed it. It’s a different challenge for us who have worked in English football for many years.

“We wanted to challenge ourselves as coaches and we’ve been impressed with everything the Scottish game has thrown at us so far.”

You have known Graham from your playing days and have worked together in management at Fleetwood Town, Scunthorpe United and Salford City. Can you give an overview of how you both work on the training ground on a daily basis, do you have specific tasks assigned to you or is the coaching smooth between the two of you?

“We share coaching on the training ground. Graham will always take tactical inputs before a game. He runs this area in preparation for every game we play.

“My role is to take the majority of the training alongside Keith Lasley at the start of the week and then hand over to Graham as match day approaches.

“Graham and I have had a strong relationship over our six years together as teammates at Preston North End and then coaching at a few clubs in England before coming to Motherwell.

“The reason I think we work well together is the similarity in our views on how football should be played.

“We have strong opinions about the application and the desire needed to succeed as a professional footballer. Our views on the game are completely aligned.

“We both had similar journeys as players when we were younger and we want to instill that in our players.

“Players can have setbacks, as we both have as players, but that’s part and parcel of the game. We’ve overcome them to have longevity in the game as players and it’s vital that the players believe in themselves physically and mentally.

Before coming to Motherwell, you and Graham took Salford into the Football League for the first time in their history. Salford City owner Gary Neville has expressed his regret at letting you both leave the football club. What was it like working at a club with the high level of attention that was at the time compared to other clubs in the National League and League 2?

“When we went to Salford it was an unfamiliar level for us because we were used to managing at the top of League One rather than the National League.

“It was a big job and the only reason we went there was because of the owners. We felt the club was only going to go one way and we could take the club to a new level.

“We managed to win promotion to the National League in the first attempt of the club’s first season at this level, which is a phenomenal achievement in hindsight.

“Whatever happens to Salford in the future, we know we have played our part in taking the club into the Football League for the first team.

“We also took them to their first ever Football League Cup final in the EFL Trophy which Richie Wellens won a year after reaching the final due to Covid-19 delaying the final by twelve months.

“Overall, the job was done for us given that we were brought on to gain promotion to the EFL, so Graham and we have no regrets about our time at Salford City.”

As a player you started your career at Rochdale, but it was Halifax Town that really put you on the map so to speak. What are your memories of your time in Halifax?

“I have very positive memories of my time at both clubs. I made my debut aged seventeen at Rochdale and then moved to Halifax where I became a regular first-team player under John McGrath .

“John was an inspirational guy and a role model for me as a former centre-back himself. He trusted me to play consistently and build a strong career in the game.”

You are synonymous with Bury and Preston North End. If we can start with Bury, you’ve earned back-to-back promotions while at Gigg Lane. Can you put into words what this period of your career was like?

“Great times. I signed for the club for £50,000 in 1993 and from there what we achieved was nothing short of remarkable.

“We had an unsuccessful playoff finish early in my time there, then bounced back to earn back-to-back promotions from Division 3 to Division 1 from 1995-1997.

“We were playing in what is now known as the Championship against massive clubs such as Manchester City and Middlesbrough and managed to survive in our first season at this level in 97/98. Manchester City actually got relegated that season, which shows how strong we were to stay in the league.

“We had a fantastic manager in Stan Ternant and probably outgrown compared to the size of the club, but it was down to Stan and the group of players we had. We had an excellent work ethic and team spirit that took us far.

“Four of those teams were sold for a fee racking up £4m in the mid to late 90s, which was an incredible sum at the time for a club the size of Bury.”

You were sold to Huddersfield Town for £1million in 1999. How was your time at The Terriers compared to Bury?

“It was a mixed experience for me. I joined the club because I wanted to work with Steve Bruce was a young and promising manager at the time and another centre-half who was a hero of mine.

“When he came to pick me up there was no doubt that I wanted to play for him. We were unlucky with injuries to key players in the first season and without those setbacks I think we had the ability to earn promotion to the Premier League.

“Steve then lost his job in my second season which was difficult for us. The club then had financial problems which led to me leaving for Preston North End.

You made over 200 appearances for Preston North End in five years at Deepdale. You developed a strong partnership with Claude Davis as the club edged closer to promotion to the Premier League. How do you reflect on your time at Preston? 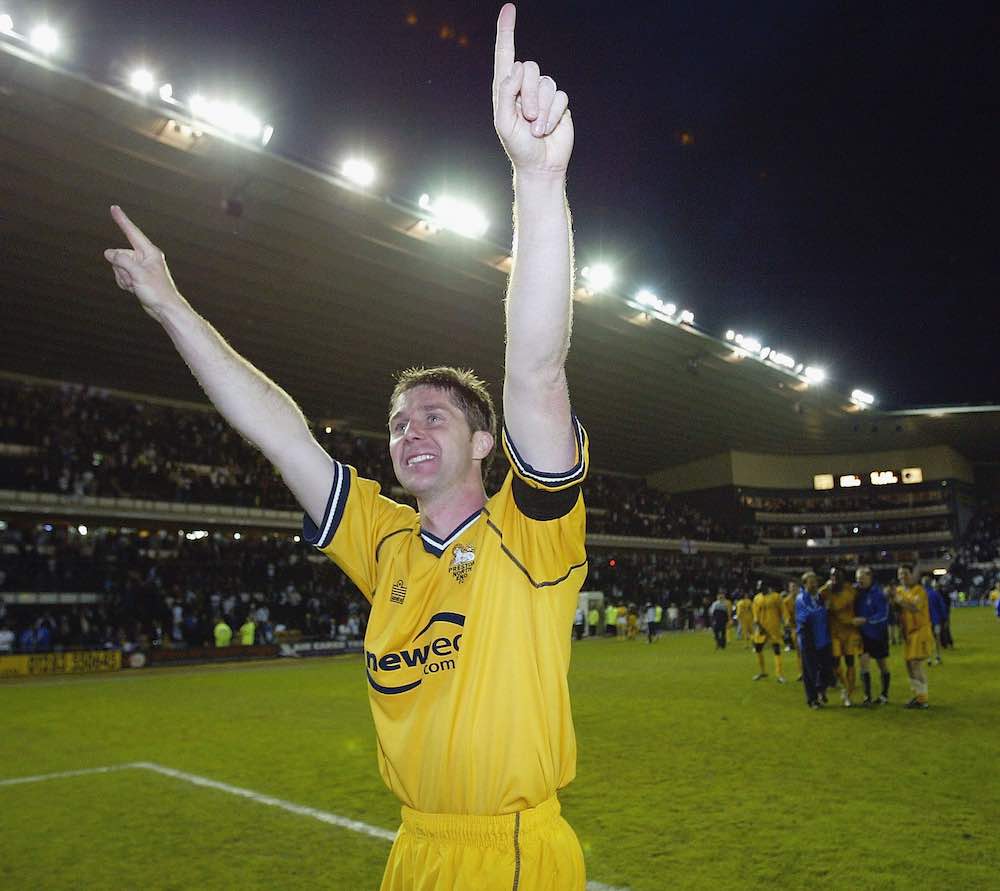 “I look back with great pride on my association with Preston. I was signed by David Moyes and joined a club that was booming under his leadership.

“The club were in the Play-Offs final the year before I arrived and we had a fantastic time there. I played with some great players including Claude as you mentioned.

“Claude was signed by Craig Brown and he was an instant hit. At 6ft 4in he was such a physically strong player with pace to burn yet comfortable on the ball.

“I loved playing alongside him and we came close to promotion again under Billy Davies. We had beaten West Ham home and away in the league that season so when we came up against them in the playoffs, I would have put my house on us beating them because we were the in-form team in the league heading into the playoffs.

“It was an incredible feeling to lead the team on such an occasion and to be alongside Sir Tom Finney as we led the team. It was a moment I will never forget.

“I was upset when we failed and honestly thought I missed my chance to play in the Premier League after that loss.”

Finally, you come to the Premier League when you were signed by Neil Warnock at Sheffield United. Remarkably, you made your Premier League debut at the age of 35. How did you feel coming into the top flight at this stage of your career?

“I never thought I would get the chance to play in the Premier League after the final playoff loss to West Ham with Preston, so when the opportunity came up to join Sheffield United I jumped at the chance. .

“I had worked with Neil before at Bury so I didn’t hesitate to work with him again. Sheffield United are a huge club and it was great to win promotion to the top level with them.

“When I came back for pre-season before the Premier League I was one of nine centre-halves so I wasn’t sure I could even break into the team.

“However, I made my Premier League debut against Portsmouth at the age of 35 and it was a dream come true. I always wanted to be a Premier League player, so finally having this opportunity was something. very special to me.

“I still hold the record of oldest English debutant in the top flight, which is nice to have.

“The big disappointment was not being able to stay in the Premier League, especially given Tevez and Mascherano’s situation at West Ham.

“The way it happened left a bitter taste in everyone’s mouth and it cost the club their Premier League status.

“West Ham beat Manchester United at Old Trafford following an astonishing Tevez goal that brought us down on the final day of the season. It was a cruel way to be relegated.

Not all news on the site expresses the point of view of the site, but we transmit this news automatically and translate it through programmatic technology on the site and not from a human editor.
Facebook
Messenger
WhatsApp
Twitter
Google+
Posted by goodwordnews In Sports Last Modified 5 months ago 5 months ago