Abramowitz suggested that the eruption of protests in major Chinese cities last week – the largest in the national capital, Beijing, and the major cities of Shanghai, Guangzhou, Chengdu and Zhengzhou – was “probably only the tip of the iceberg,” as China’s gigantic internet censorship apparatus keeps news of many small protests in less populated areas from getting out of the country.

The Freedom House president answered questions from Breitbart News over the weekend about the origin, nature and potential impact of last week’s protests. Opposition to the Communist Party’s “zero-Covid” policy, which relies heavily on the brutal lockdown of major cities and the imprisonment of thousands of people in poorly administered quarantine camps, appears to be driving the protests. Immediately before the protests spread to the country’s biggest cities, the mishandling of a fire in Urumqi, the capital of the occupied East Turkestan region where the Communist Party is currently committing genocide against its native Muslim population, seemed to be the seed of much public disgust. The Urumqi fire is believed to have claimed between 10 and 40 lives, including children, as the building in question was locked down in accordance with the “zero-Covid” policy and firefighters were unable to get close enough to carry out their work.

Many, however, seemed to voice their opposition to the Party’s repression in general, choosing to hold up blank sheets of paper – representing what they are legally allowed to say in the country – as an expression of dissent.

Shortly before the protests in late November, Freedom House launched a new initiative called the China Dissent Monitor, a database intended to document and make searchable the growing number of anti-government protests and public events in the country. Freedom House noted that public repudiation of government had become so common that it needed the organization to establish a plan to track everything.

“Contrary to what the CCP [Chinese Communist Party] would like the world to believe, these protests are not the only recent example of people using public acts of dissent to express themselves in China,” Abramowitz told Breitbart News. “Between June and October this year, Freedom House’s China Dissent Monitor tracked at least 822 public expressions of dissent, with incidents scattered across 27 provinces.

Demonstrators march down a street during a rally for the victims of a deadly fire as well as a demonstration against China’s harsh Covid-19 restrictions in Beijing on November 28, 2022. (Noel CELIS / AFP)

“Dozens of protests attended by thousands may seem small in a country of 1.5 billion people, but given how little reporting from the ground crosses the Great Firewall, which we have seen this week is probably just the tip of the iceberg,” he explained.

China’s coronavirus civil rights violations, he continued, have been at the center of the latest protests, but “they are also an expression of the Chinese people’s broader frustration with years of growing government repression, which has only gotten worse since the outbreak of COVID-19.” .”

“Demands related to an end to zero-COVID measures appear to be more widespread than overt calls for political freedoms or change, but the latter are also more dangerous, so many protests are likely driven by a combination of the two factors. “, observed Abramowitz.

The Chinese Communist Party has largely refused to acknowledge the legitimacy of the protests, blaming unspecified “infiltration and sabotage” by foreign enemies for what it sees as unnecessary disruptions to social order. She has, however, started a campaign to rehabilitate the reputation of her “zero-Covid” policy.

“You could say you prefer more freedom, more freedom, but then you have to be prepared to die,” China’s UN ambassador Zhang Jun said last week following the protests. Chinese government media such as world times and People’s Daily newspapers raised the specter of foreign “intervention” in China fueling protests without evidence.

At the highest levels of power, however, top officials have changed their rhetoric, saying ‘zero-Covid’ requires ‘optimization’ which would involve easing lockdown restrictions. Sun Chunlan, the senior Politburo official whom dictator Xi Jinping lasted to enforce the shutdowns, announced last week that officials would work to “improve diagnosis, testing, treatment and quarantine measures, strengthen vaccination of the general population, especially the elderly, and intensify the preparation of medicines and other medical resources.

In particular, Sun said that the omicron variants of the Chinese coronavirus cause “weaker” disease, an admission unprecedented for a Chinese regime official.

From Friday, the world times proclaimed that Chinese scientists from Wuhan University had just discovered that omicron caused less severe illnesses in patients, a conclusion that the world’s other top scientists came to in late 2021 and early 2022. 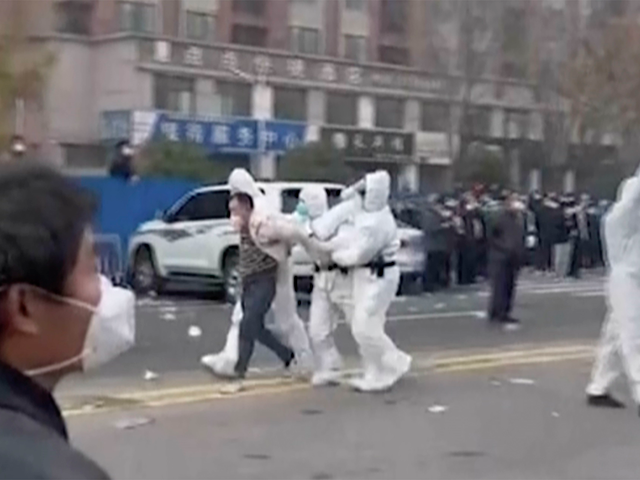 In this photo provided on November 23, 2022, security guards wearing protective clothing are seen leading a person away during a protest at the compound of the factory operated by Foxconn Technology Group, which leads the world’s largest Apple iPhone factory in Zhengzhou, Henan Province, central China. (AP)

The answer seems to be partly related to the changing nature of the protests.

“We don’t believe the protests were coordinated by any broader movement or key figures, but we are seeing an unusual degree of interdependence for protests in China,” Abramowitz told Breitbart News. “Most of the dissent Freedom House has tracked in China involves isolated incidents in specific cities, but in just three days, the November 25 protests morphed into a decentralized movement made up of dozens of protests with a timeline, symbolism and common messages. ”

“Over the past couple of days, we have observed a possible shift in propaganda rhetoric to try to reduce public fears about COVID-19, as well as potential steps to scale up vaccination efforts,” he said. noted Abramowitz. “These could be the precursors to policy changes, but any change will be slow, if at all.”

Abramowitz noted that the government “at the local level” seemed to have responded to protesters throughout the year, but only enough to prevent an anti-regime movement from growing.

“Fifteen of the 79 anti-lockdown protests recorded by Freedom House from June to October resulted in concessions from local authorities, and Beijing reportedly announced a plan to move away from the zero-COVID policy,” Abramowitz observed.

China is one of the most repressive regimes in the world, according to the latest edition of Freedom House’s annual Freedom in the World report. Occupied Tibet was ranked the least free place in the world, tied with Syria and South Sudan, on the 2022 list. China itself, excluding Tibet and Hong Kong, is ranked ninth.

“Chinese government officials have continued to take advantage of the COVID-19 pandemic, among other justifications, to restrict religious practice, including closing or limiting access to Buddhist temples and monasteries,” Freedom House noted at About Tibet. “Officials have also imposed increasingly oppressive ideological controls and political indoctrination at temples and monasteries, and supplemented internal video surveillance at these sites by human supervisors and informants.”

In the rest of China, Freedom House noted that the regime “continued to exploit the pandemic to justify intensified surveillance and scrutiny of citizens’ behavior, and to punish those who provided independent sources of information and criticism on the government’s management of the contagion”.

Abramowitz said that, given the scale and historical effectiveness of China’s repressive operation, any major change for freedom in the country would likely require much more protracted and organized resistance than exists. currently.

“Chinese protesters are risking everything to fight for their freedom, which is encouraging in itself, but the CCP is still one of the most authoritarian regimes in the world, so short-term structural or regime change is extremely unlikely. ,” he concluded.

Not all news on the site expresses the point of view of the site, but we transmit this news automatically and translate it through programmatic technology on the site and not from a human editor.
William2022-12-05
166
Facebook Twitter LinkedIn Pinterest WhatsApp