Chelsea fans chanted the name of owner Roman Abramovich during the planned show of solidarity with Ukraine ahead of their Premier League clash against Burnley.

Premier League clubs show their support for Ukraine this weekend after Russia invaded the country, but home fans at Turf Moor booed Chelsea fans for their decision to pay their respects to Abramovich during the applause the minute before kick-off.

Abramovich announced his decision to sell Chelsea on Wednesday night, saying he believed “it was in the best interest of the club”.

The Russian billionaire has bankrolled the Blues since taking over in 2003, his funding helping Chelsea win 19 major trophies during his reign – and traveling supporters at Turf Moor on Saturday chose to chant his name ahead of kick-off as both groups of players observed a minute of applause for the victims of the war in Ukraine.

Chelsea face the prospect of Abramovich being placed under sanctions by the British government, which is threatening to target Russian businessmen following Russia’s invasion of Ukraine.

Abramovich denies ties to the Russian government or President Vladimir Putin and denies doing anything that would warrant being sanctioned.

When asked if the Chelsea owner could sell the club if sanctioned by the UK government, Richard Masters, the Premier League chief executive said: “I don’t think that will work.”

Burnley chairman Alan Pace had a few words about the Ukraine crisis in his program notes.

“Events unfolding in the world today put football in context,” Pace wrote. “I want to use this column to once again send solidarity and support to the people of Ukraine following the devastating scenes that have been unfolding in the country since the Russian invasion.

“I believe in times like this football it has the power to come together and send a clear message. We were proud to welcome members of the local Ukrainian community to Turf Moor this week and I want to bring my support for all those affected in the region.”

The Clarets wore warm-up shirts with the words ‘Football Stands United – No War’ after hosting the local Ukrainians for the loss to Leicester in midweek.

Earlier on Saturday, Leicester City and Leeds United kicked off the Premier League’s planned show of support for Ukraine following Russia’s invasion of the country.

During Saturday’s lunchtime kick-off at the King Power Stadium, which Leicester won 1-0, pro-Ukraine and anti-war messages were displayed along with other activities in the stadium to promote the peace.

Following the invasion of Ukraine, players draping the country’s flag around them as they walked out were just one of the gestures shown at last weekend’s fixtures – and similar tokens of solidarity presented before the match at Leicester.

Both groups of players observed a moment of silence for Ukraine, while a Ukrainian flag was also held by the teams.

Leicester supporters displayed a banner reading ‘We are with Ukraine’ alongside a picture of the Ukrainian flag ahead of their game against Leeds.

Leicester has teamed up with the British and Ukrainian Red Cross to raise funds and supplies to send to the beleaguered capital of Kyiv – where essentials are running out for residents sheltering underground.

The English top flight continued to rally behind Ukraine, with fans encouraged to join the club’s players, managers, match officials and staff in a moment of reflection and solidarity ahead of kick-off. every game.

Stadium screens will display “Football Stands Together” against a backdrop of blue and yellow colors of the Ukrainian flag.

Aston Villa and Brighton came together ahead of their WSL match to show their support for Ukraine.


In the WSL, Brighton wore their blue and yellow third kit against Aston Villa as both teams displayed Ukrainian flags before kick-off.

It was a similar scene at Craven Cottage before Fulham’s Championship clash with Blackburn Rovers. It’s a weekend where the football community comes together to show their support.

Ahead of the nationwide kick-off, the teams will stand in the center circle to remember all those affected by the shocking events in Ukraine. 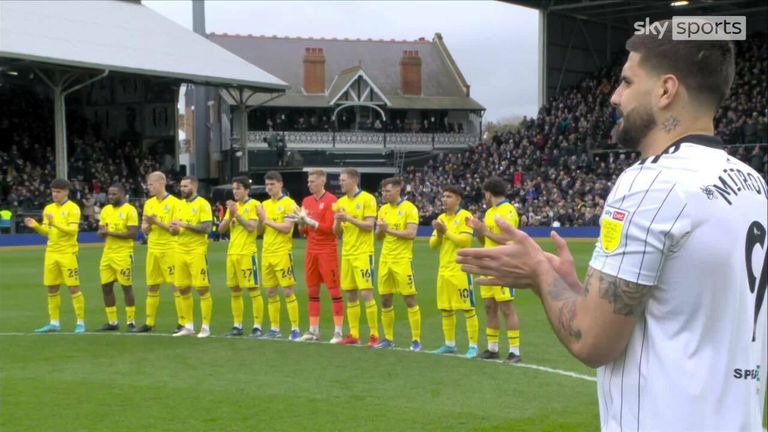 Fulham and Blackburn watch a moment of applause for Ukraine ahead of their league match at Craven Cottage.


Southampton went one step further by showing their support for Ukraine ahead of Saturday’s Premier League game at Aston Villa.

The club has teamed up with main club partner Sportsbet.io, which has an office in Kyiv, to provide free scarves to the 3,000 traveling fans as a show of solidarity.

Both Molineux and Carrow Road expressed a similar sentiment with splashes of blue and yellow ahead of Wolves v Crystal Palace and Norwich v Brentford respectively.

Not all news on the site expresses the point of view of the site, but we transmit this news automatically and translate it through programmatic technology on the site and not from a human editor.
Eleon2022-03-05
188
Facebook Twitter LinkedIn Pinterest WhatsApp

6 Nations Tournament: after the laborious performance against Italy, what can the Blues hope for against Ireland?