Cande Molfese and Gastón Soffritti are no longer hidden and this weekend they shared their first photo together in privacy. A few weeks ago and after the rumors of romance with the actor became strong, the actress spoke and said that they had met on a work trip.

the weekend the former Ugly Duckling was answering questions from his followers on Instagram and someone wanted to know if “Is something wrong with Cande?”, so, he wrote: “Mmm I don’t know, for me something happens there”. Her response was accompanied by a very close-up selfie of the two of them, cheek to cheek. In this way, the new couple of actors confirmed their budding relationship. 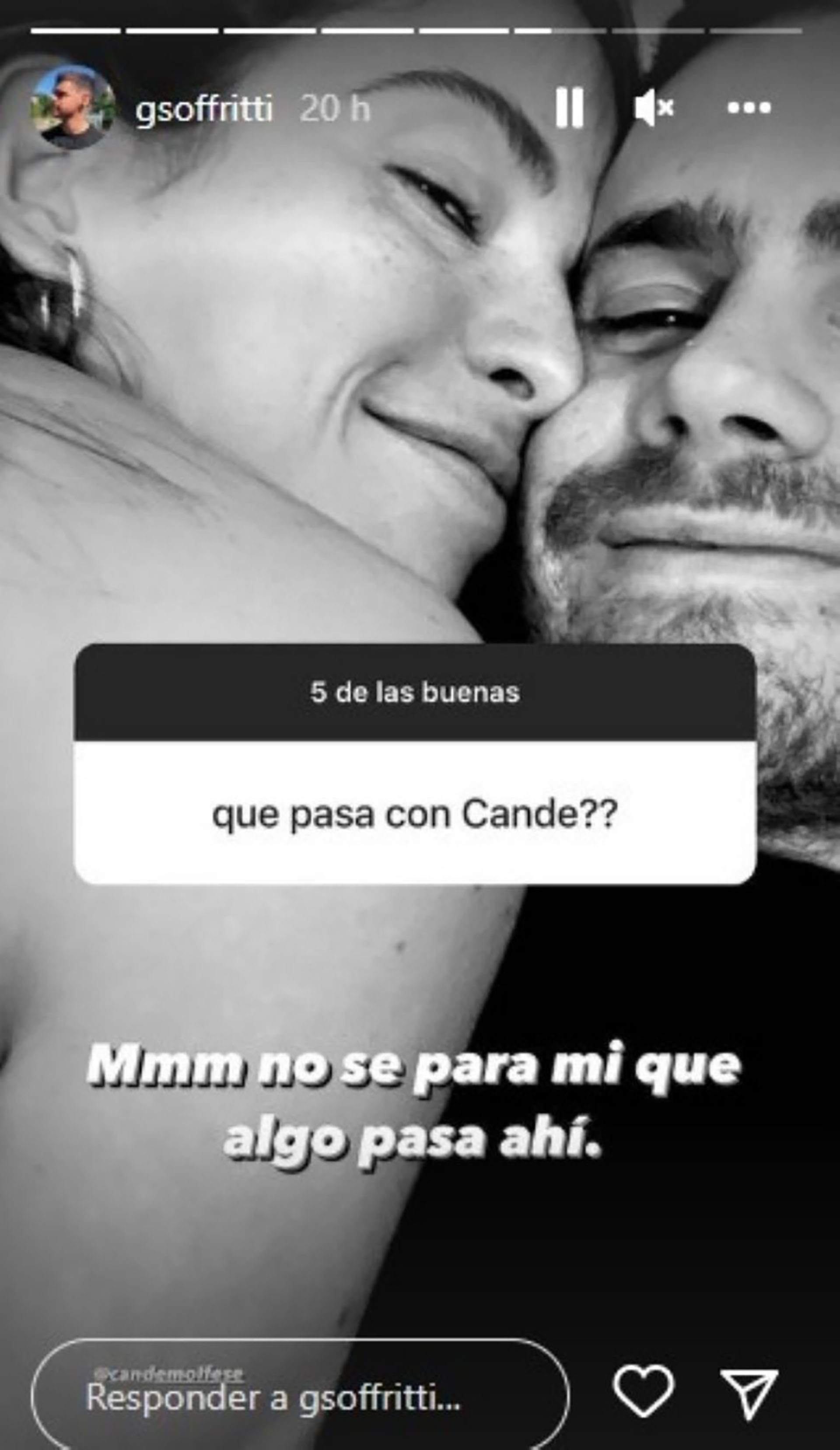 The news of the courtship was announced by Vicky Braier, popularly known as juariu, who was attentive to the coincidences of both on social networks, including a trip to Bariloche for labor issues. “I think he kicked us, because we were in the same place, but we had just met. I am very happy, I am very well because I feel that we are on the same page, ”said the actress two weeks ago in the cycle she performs in Luzu TV, Before anyonewith Diego Leuco, Mica Vázquez and Martín Dardik.

“Being with someone, being in a relationship, is difficult. He is very good, but you have to find yourself in the middle, and luckily he is very much in the same. Before going to the South on this trip that I met him, I told myself: ‘Enough, I’m not going to have any more dates, I’m not going to go out anymore and may the Universe give me what is really for me’, and it appeared”, he said and assured that they did not have the label of “boyfriends”.

“Maybe they saw us because we were dating, but we are very relaxed. We are getting to know each other and we feel very good”, he explained. In addition, he explained that The actor was the one who took the initiative to ask her out the same day they met, as soon as he arrived in Buenos Aires. With complicity, Leuco asked him if the actor knows his dog, Almendra, famous on Cande’s Instagram account, where it exceeds 7 million followers. “Yes, she wants him over me, I’m outraged,” she joked, about the moments they share in her house.

The actress and singer had been in a relationship for six years with the Italian actor she met in Violetta, Ruggero Pascuarelli and separated in 2020. “My process began in 2019 with which I knew that this relationship could not continue much longer. The truth is that it was a bond with which I ended up very disappointed and hurt, So it was easier to make the decision because you are not going to stay in a place where you are not comfortable, happy or you do not finish shining as you deserve, “he said in dialogue with teleshow in March of this year.

On the day after the breakup, she added: “At the beginning I felt anguish, because I was used to being in a relationship and I had to rearm myself. But the universe paved the way for me, the work began to flow even more. So I saw everything positive despite the pain I felt. I’m honest at the beginning I was very good because one tends to cover up or it happened to me in my duel. Then I got the record of all the things that had happened to me. It is a long duel because it continues to this day. The truth is that I continue to heal because it was all very intense and painful. Now I’m fine, more armed, I’m still going out with people, I had a good time and so on. Although in some matters I am still hurt, my duel is taking a long time, but I want to respect it because there is no time”.

Florencia De La V, intimate: “In this country I was an emblem, the flag of a group that was totally invisible”
María Becerra whitewashed her courtship with J Rei with a compliment for her mother-in-law: “The prettiest”
Nathy Peluso responded to the criticism of her Argentine fans after assuring that she felt Spanish

Not all news on the site expresses the point of view of the site, but we transmit this news automatically and translate it through programmatic technology on the site and not from a human editor.
Sara Adm2022-08-15
Facebook Twitter LinkedIn Pinterest WhatsApp

How to make a Dirty Shirley, the unofficial summer drink

21 of the funniest jokes about email greetings and approvals