Green Bay Packers running back Aaron Jones rushed for 132 yards, while Aaron Rodgers joined an elite club of quarterbacks who threw 450 touchdown passes in the NFL, as they defeated the Chicago Bears 27-10. 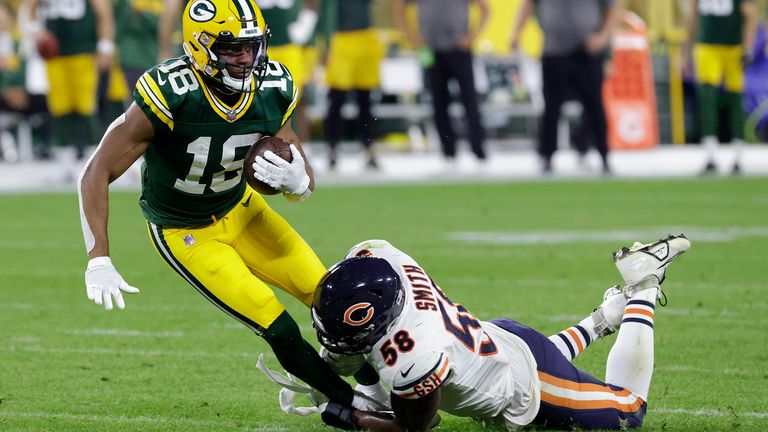 Highlights of the Chicago Bears vs. the Green Bay Packers from week two of the NFL season

Highlights of the Chicago Bears vs. the Green Bay Packers from week two of the NFL season

The Green Bay Packers bounced back from their Week 1 loss to the Minnesota Vikings with a comprehensive 27-10 home win over division rivals the Chicago Bears at Lambeau Field on Sunday night.

Aaron Jones rushed for 132 yards and a touchdown, and caught a game-tying pass from Aaron Rodgers, who continued his dominance over the Bears.

Jones had five carries for 49 yards and three catches for 27 yards in a 23-7 season opener loss to Minnesota, and the Packers (1-1) vowed he would play a bigger role.

This turned out to be the case. He was successful, gaining 8.8 yards per carry and leading the Packers 203-yard rushing offense. He had 15 carries and three catches for 38 yards.

Green Bay beat the Bears (1-1) for the seventh straight time, tying its second-longest winning streak in the 205-game history of the NFL’s oldest rivalry. The Packers had 10 straight wins over the Bears from 1994-1998. They have two other seven-game winning streaks in that series, from 1928-30 and 2000-03.

The Packers took a 24-7 halftime lead dominating the second period, then stopped on the goal line in the fourth quarter to thwart a comeback attempt by the Bears.

A week after struggling to connect with his new crop of receivers, Rodgers was typically effective, going 19 of 25 for 234 yards and two touchdowns. The Packers are 24-5 against the Bears in games Rodgers has started.

Chicago’s David Montgomery rushed for 122 yards on 15 carries. Fields had a touchdown and was 7 of 11 for 70 yards with an interception.

The Packers outscored the Bears 21-0 in the second quarter. Jones scored twice, each time catching Rodgers throws in the backfield and reaching the end zone.

The first was a back pass that was ruled as a 15-yard run. On the second touchdown, Jones got in motion, caught a return pass in the backfield, and scored from eight yards out. Jones has benefited from the return of right tackle Elgton Jenkins, playing for the first time since tearing his left anterior cruciate ligament last November.

Rodgers added number 451 in the final minute of the first half with a five-yard completion to Allen Lazard, who missed the Vikings game with an ankle injury.

Rodgers completed passes to eight receivers. None had more than three receptions, but Sammy Watkins turned his trio of catches into 93 yards.

The Bears made the game competitive in the second half, capitalizing on Green Bay’s mistakes.

Cairo Santos’ 40-yard field goal cut Green Bay’s lead to 24-10 after a failed rally between Rodgers and AJ Dillon gave the Bears the ball at 31.

The Packers’ next series was foiled when a snap from Josh Myers hit receiver Christian Watson, who was on the move, and passed Rodgers. Dillon recovered the fumble, but it put the Packers in a third-and-22 situation and led to a punt.

Chicago drove to the Green Bay end zone and knocked down an apparent 6-yard touchdown by Fields when replays determined he was down before stretching his arm across the goal line.

On the next play, Fields again ran on fourth base from inside 1, and officials ruled Preston Smith and Jarran Reed stopped him just short of the end zone with just over eight minutes left. play in the game.

What they said… Jones: ‘I knew I had to show up’

Aaron Jones was delighted to have spearheaded the win.

“It naturally made me smile,” said Aaron Jones. “I knew I had to show up when my number was called. That pushes me even harder.

“That says a lot about our attack,” he added. “You know what’s coming, but you have to stop it. It’s not easy to do. I just say kudos to our entire offensive unit and our entire team for responding and bouncing back from last week. “

“Tonight was really about 28 (AJ Dillon) and 33 (Jones) giving them the football,” Aaron Rodgers said. “I didn’t play very well. I feel like the stats are a bit better than the game.

“I missed shots that I should never miss. There were opportunities for more runs there.”

“To come out with a disappointing loss like this hurts,” Bears quarterback Justin Fields said. “We just have to respond.”

The second week of the NFL season ends with a double assist from Monday Night Football.

The much-loved Buffalo Bills are looking to back up their opener win over the LA Rams, when they host the Tennessee Titans 0-1 on the fly. Sky Sports Arena.

Meanwhile, the in-form Minnesota Vikings travel to Philadelphia to face the Eagles on Sky Sports NFL.

Not all news on the site expresses the point of view of the site, but we transmit this news automatically and translate it through programmatic technology on the site and not from a human editor.
Eleon2022-09-19
Facebook Twitter LinkedIn Pinterest WhatsApp