With Brazil among the favorites to win the 2022 World Cup, it’s no surprise that Premier League sides are signing their players.

There is plenty of hope that the record-breaking five-time winners can claim their first trophy since 2002, with the stability of manager Tite and the pressure finally on Neymar’s shoulders with top-class teammates all around him.

Last year was a learning experience for the South Americans, who lost their Copa America to fierce rivals Argentina but won gold at the Tokyo Olympics.

And now everything is falling into place, as long as the big money moves of English teams don’t ruin the form or confidence of their players…

An estimated £350million has been spent by Premier League teams on Brazilian players this summer and the impact is already being felt.

Gabriel Jesus, who will be integral to Brazil’s chances of success this winter, began life as an Arsenal player with a level of confidence that seems insatiable.

A £45m move from champions Manchester City looks to be one of the best deals in Europe this season already, with the 25-year-old picking up two goals and three assists in just four games.

Richarlison, who made headlines with a controversial samba skill over the weekend, has been deemed important enough for Tottenham boss Antonio Conte to be happy to shell out £60m for his services.

Richarlison hits back at Pennant’s showboating criticism on talkSPORT

The fee raised some eyebrows, with Spurs already possessing one of the best front three in the league, but the former Everton man’s vital goals and tireless work-rate for Brazil at the Olympics made that clear the reason.

Real Madrid secured £60million for the serial winner, but with plenty of time remaining at the age of 30, his masterful performances in defensive midfield could be the difference for United and Brazil.

In fact, Ten Hag is so keen on what the Brazilians can bring to his team that he made Antony the third most expensive signing in Premier League history, reuniting manager and player after two years together. in the Eredivisie.

Some have questioned the wisdom of the £85million deal, but to question Ten Hag would also be to doubt Tite, who sees as much in the winger as he will be a regular fixture in Qatar.

Elsewhere, West Ham spent a club-record £51m to land Lucas Paqueta from Lyon, while Aston Villa brought in Diego Carlos from Sevilla and made Philippe Coutinho permanent on loan for £17m .

Coutinho and Paqueta are starters for Brazil and now have the Premier League as their testing ground ahead of what could turn out to be the biggest tournament of their lives. 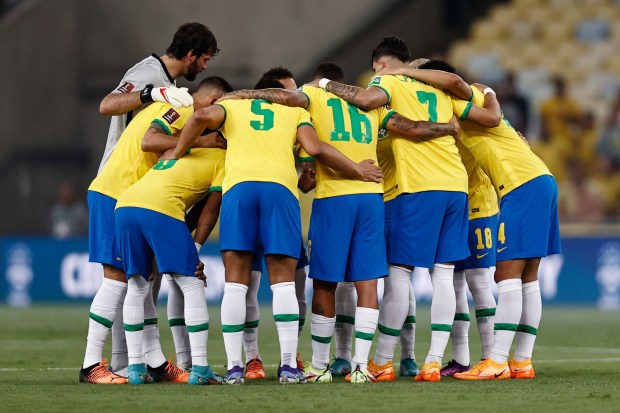 Ederson Moraes, Alisson Becker, Fabinho and Bruno Guimaraes are just some of the Brazilian Premier League stars to become integral parts of their squads while Thiago Silva, Joelinton and Andreas Pereira continue to go unnoticed.

Not only will Tite be thrilled when he takes on the Premier League on a Saturday morning in Brazil, but so will Neymar, with the Paris Saint-Germain striker previously hinting this World Cup could be his last, he now has the talent in England. to make it a winner.

What if that wasn’t enough to end two decades of suffering for the country that made the game great? Well, they have the Real Madrid trio of Vinicius Jr, Rodrygo and Eder Militao to help them over the line.

Offer of the day

Deposit at least £/$/€10 using promo code 888ODDS • Bet up to £/$/€5 on your selection at normal regular market odds • If your selection wins, we’ll pay you the normal price and any additional winnings from the advertised enhanced prize will be paid out to you as free bets • Free bets are awarded within 72 hours and expire after 7 days • Free bet stakes are not included in returns • Deposit balance is available for withdraw anytime • Restrictions apply to withdrawals, payment methods and countries and full terms and conditions apply 18+ Begambleaware.org

Not all news on the site expresses the point of view of the site, but we transmit this news automatically and translate it through programmatic technology on the site and not from a human editor.
smsmalexAugust 31, 2022
Facebook Twitter LinkedIn Pinterest WhatsApp