As Amir Khan and Kell Brook made their first fight week public appearances ahead of Saturday’s highly anticipated bout, Sky Sports News was on hand to pick up on any clues the fighters provided.

The pair were greeted by a large crowd at Manchester’s Trafford Center on Wednesday afternoon as they carried out public training ahead of Saturday’s grudge match, which is live on Sky Sports ticket office.

Brook, a Yorkshireman in Khan’s territory in Lancashire, arrived in the ring to boos, while Khan was almost universally cheered by locals. But beyond the pantomime scenes, there was plenty of information to be gleaned from the who’s who of British boxing present.

Tokyo Olympics bronze medalist Frazer Clarke showed some of her power ahead of her professional debut, Natasha Jonas looked skilled as she prepared for her third attempt at becoming world champion, but with Brook front in the ring next, the tension levels suddenly increased.

While Khan’s most loyal supporters tried to make Brook feel unwelcome, those with a close view of the Sheffield fighter were quickly won over by his looks.

There was a mixed reaction from the crowd when Khan and Kell Brook entered the ring for their public workouts.


Preparing to fight for the first time since a stoppage loss to Terence Crawford in November 2020, Brook emerged in fantastic form, showing vicious power as he sent punches into the pads of the Coach Dominic Ingle.

After impressing in the ring, Brook said sky sports that Khan had made a mistake in prolonging negotiations for the fight, and that the extra time in training left him able to drop to the 149-pound weight limit much more easily than in the past.

Members of Brook’s camp could be heard at ringside backing up their fighter’s words, insisting that the extra months he has spent preparing abroad in Fuerteventura means there will be no no complications before Friday’s weigh-in.

Former world lightweight champion Anthony Crolla and trainer Dave Coldwell were both impressed with what they saw, but neither was fully convinced by the rhetoric coming from Brook’s camp. 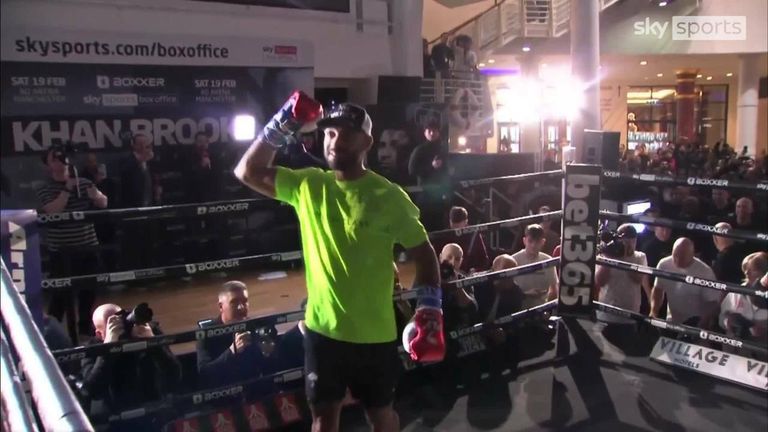 Brook looked razor sharp despite a chorus of boos from Khan’s supporters during open practice.

“He looks in amazing shape and full of energy. I still think the weight will be a bit of an issue, but not as much now as I’ve seen him.”

Coldwell added: “I thought Kell looked fantastic, I watched how he sat on his legs, very powerful, his legs looked really strong and he was really nice and sharp on the pads.

“But looking at Kell’s face and how he normally looks at the weigh-ins, it looks like he still has a lot of weight to lose.

“He looks great today but it could take a lot away from him, that’s why I’m worried about him. 149 is going to be an absolute struggle for him, I don’t care what he says.” 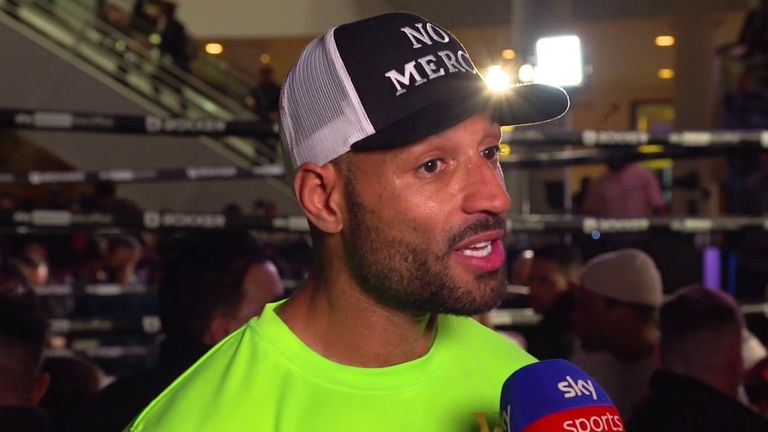 Brook says Khan made a mistake delaying the fight for seven months and insists he doesn’t have to worry about gaining weight.


Brian ‘Bomac’ McIntyre, the American trainer who oversaw Terence Crawford’s rise to pound-for-pound kingship and is training Khan for the first time in this fight, was less impressed.

“I watched him (Brook) a little bit,” he said. Sky Sports News. “I’m not impressed until you get in the ring.”

Khan watched from a balcony above as Brook practiced, waving to fans who spotted him, before making his own grand entrance.

Crolla, along with Khan’s fans, were impressed when the Bolton fighter showed his speed in several shadow boxing drills, but that’s all they got as Khan chose not to put on his gloves.

Brook’s longtime manager Dominic Ingle offered his own theory on the limited projection, while stating his belief that Khan’s reception had been underwhelming. 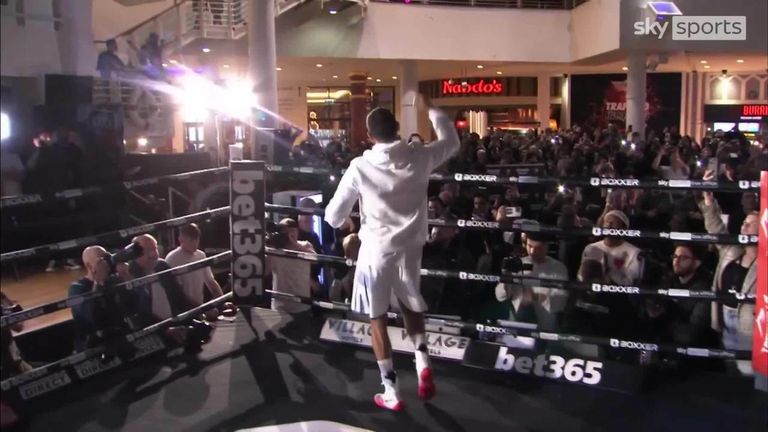 Khan received a rapturous reception from his fans as he entered the ring for open practice.


“He came in today, he did a bit of shadow boxing, no one took him to the pads, he’s visibly tired,” Ingle said. Sky Sports News.

“There may have been a few boos for Kell, but there wasn’t a massive roar for Khan either. When I came to these places when Ricky Hatton was doing public workouts, it was a huge noise like if everyone was behind him.

“It’s a fantastic turnout, but I expected more roars for Khan throughout his training, but he probably disappointed his fans by just doing shadow boxing instead of paddling and let people see what he has.”

Coldwell agreed: “I think when there’s a big crowd and you’re the main event everyone’s there to see you, I think you should just hit a little pads rather than do a little boxing. I always find that a little disappointing.”

Is Khan trying to liquidate Brook?

Sky Sports News Journalist Craig Slater, who has been embedded in Khan’s camp throughout the fight week, gave his analysis of Wednesday’s events.

The mood in Khan’s camp is quite striking. There is, apparently – at least on the surface – the lack of intensity, the kind of hard-to-contain simmering fury that a boxer often exhibits before a big fight. 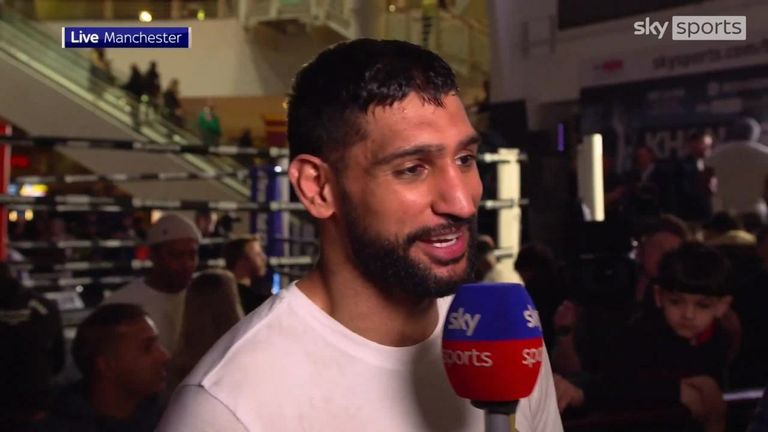 Khan says he expects Brook to be looking for a knockout, but he’s confident he’ll be the one to pick up the win.


The only takeaway from that given how hard Khan works, and he still has significant gym sessions in the middle of fight week itself, is that Khan is really relaxed and confident about it. Maybe he’s quite confident that he’s a league or two above Kell Brook and this will be a pretty straightforward fight for him.

The other aspect is that he’s been on this journey so many times before, he’s comfortable with the hype before a big box office event like this, and he’s playing a laid-back character partly to liquidate Kell Brook, who for a long time felt disrespected by Khan.

I think this is all maybe a bit of a psychological ploy by Khan to put Kell Brook in a bit more of a bad mood because he doesn’t want him to fight rationally he wants an angry Kell Brook that he can exhibit with clinical boxing.

Thursday brings the press conference, where Khan and Brook will come face to face for the first time this fight week.

Boxxer promoter Ben Shalom, who managed to make the grudge match after years of feuding between the rivals, is expecting fireworks.

“They trained extremely hard,” Shalom said. Sky Sports News. “They’re both coming in in amazing shape, I think they’re both extremely confident as well, but when they meet for the first time I think they’ll both realize that the other has put also at work. Former world champion Carl Froch said he was backing Brook to beat Khan in their next fight.


“It didn’t really kick off last time, it was still a very hectic atmosphere, but now it’s Thursday, bordering on fight night, it’s going to be interesting.”

Meanwhile, Crolla, one of the most popular fighters in Manchester’s storied boxing history, believes the atmosphere around town will only intensify as Saturday night approaches.

“I think it’s just going to build and build,” Crolla said. “Tomorrow we’re going to get them talking and I’m sure there will be some verbals.”

“For me, the problem is that it’s a real grudge match. Nothing happens to sell tickets, it’s real grudge.”

Watch Khan vs Brook on Saturday, live on Sky Sports Box Office, from 6pm. Book it via your Sky remote or book it online here. Non-Sky TV subscribers can book and watch here.

Not all news on the site expresses the point of view of the site, but we transmit this news automatically and translate it through programmatic technology on the site and not from a human editor.
Eleon2022-02-16
168
Facebook Twitter LinkedIn Pinterest WhatsApp