“I just want to enjoy the last years of my career,” says Alan Judge.

It’s a simple wish from the 33-year-old Irishman, who has been through the factory for the past six years and is now playing in League Two for the first time in his career, with Colchester.

His recent journey to this point has been littered with misfortune and began with a horrific broken leg in April 2016, while at Brentford.

After the best part of two years of recovery, he returned to action, but was unable to force a return to the team he had previously played such a big role in, leading to a quiet exit. to Ipswich in January 2019.

Although the Tractor Boys were on their way to possible relegation, a run of 19 games helped Judge get back into the rhythm with the regular football he had been starving for during the last months of his stay in west London and He was called. the Republic of Ireland team too.

But that summer things changed when there was talk of a return to the Championship with QPR.

“I felt like myself again in the first six months I was at Ipswich, no doubt. I was enjoying my football,” Judge said, speaking to sky sports.

“Then QPR tried to buy me and obviously I was interested. It was Championship football and my family still lived in London. Things were leaked to the Ipswich press but they didn’t understand all the ins and outs of what was going on with my family life and my fans just thought i wanted to leave right away which i didn’t and i took a while to get over it to put back.

“Initially I had a release clause in my contract. When I first signed at Ipswich I was given an 18 month contract but I signed a new one after six or seven So my theory behind the release clause was the owner would get his money back for betting on me after my injury Few teams would have bet on a player returning after two years away.

“But the owner didn’t want to sell me – it was as simple as that. I just lived with it and didn’t make a fuss or refuse to train. I told him my family situation, but he really wanted me to stay. Once he said I wasn’t going, that was the end of the story.

True to his word, there were no issues over the next two seasons, other than Judge being mostly deployed on the left wing, much to his frustration. “I was never a winger. I was always sidelined because of the type of player I am – I would run for the team and they knew I would come back.”

Then, one day in early April last year, a bomb was dropped. Following a 3–0 loss at AFC Wimbledon, Judge was told he had made his final appearance for the club; one more departure would have triggered a further one-year contract extension – a clause the club no longer wanted to exercise.

With his family situation at the time, it was a blow.

“It was very difficult at the time because my mother died two weeks before,” he explains.

“I played for the club continuously all year. I knew my mum had cancer but she was pretty bad in the three months leading up to it so I was playing on a Saturday, returning to Dublin on Sunday, coming back on monday to train, play again tuesday night, fly back to dublin wednesday morning, come back and play again saturday.

To me, it felt like it had just been thrown away – I felt like I deserved a little more. It wasn’t like I was playing bad either, I was playing pretty well but I understand the club was going in a different direction.

“I was told it was Paul Cook’s decision and then I was told it was the new owner’s decision. I don’t know who made the decision to be honest. It was a place weird place to be. I said in my statement when I left there that it doesn’t surprise me anymore what happens in football. But I generally liked being at Ipswich. It’s a holy place, the club is great and the people are great there.

“I stayed at the club, trained on my own and still used the facilities because, as far as I was concerned, I was still under contract with the club until the summer, so I kept myself fit and was deciding what to do with my family. I did my business, said hello to the guys and people there because the staff treated me very well.

When his contract expired at the end of June, the next opportunity presented itself in Colchester, just 16 miles away on the A12.

With Hayden Mullins installed as head coach on a permanent basis after guiding the club to safety in 2020/21 and three other former Ipswich teammates – Cole Skuse, Luke Chambers and Freddie Sears – having already swapped Portman Road for the Jobserve Community Stadium, the project in Essex was attractive.

“I was interested in the vision they had and everything they were trying to do,” adds Judge.

“I live in Ipswich, my family is really settled, I’m happy here and it made sense to me. I also knew the quality and type of players coming in, and then I just had to listen to the people who lead the club and I have embraced their ideas.

However, it didn’t quite go as planned. Mullins was relieved of his duties on January 19, following a five-game losing streak, and although the U have not fallen into the relegation zone so far this season, they remain just eight points above with seven games to play.

“My idea was that I would like to try to do something at Colchester, but we are going through a difficult year and our main focus now is to make sure we stay on our feet. It is still a club in transition with a lot on and off the pitch and we can take care of other things that need to be dealt with as long as we reach our main goal and stay on our feet.

“Against most teams we don’t lose games by a lot of goals, we lose them by an odd goal and there are games we should have seen that we didn’t, for example Leyton Orient, Oldham, Carlisle: They are games that we should have taken points from, but we took three points from those three games.

“We have a young team, so sometimes we are a little naive, but they will acquire it with experience – they have played a lot of games, so hopefully the next year they will have it and we’re all better for that.

And how did Judge find the experience of playing in Ligue 2 for the first time? 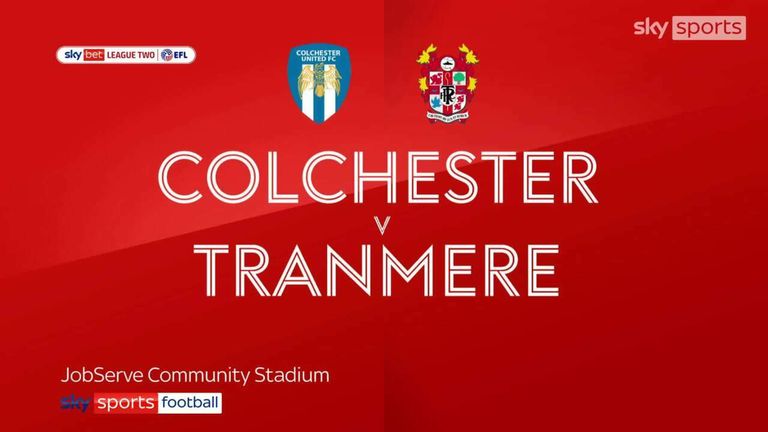 Highlights of the Sky Bet League Two game between Colchester and Tranmere.

“I’m very surprised at the amount of football that’s actually being played – and I’m not saying that disrespectfully,” he said, correcting himself.

“When I played for Brentford in League 1 it was a bit of a mix and there weren’t many teams trying to play football. There are a lot of good teams – Swindon, Forest Green, Hartlepool are trying to play from the back and Joey Barton also has Bristol Rovers playing good football.

“I’m playing a bit deeper this year which I appreciate and maybe I need to try to read the game a bit better because sometimes the ball doesn’t get to midfield as much; it can move faster and you take the seconds.

“We will learn from this year, our main goal is to stay up, go back next year and hopefully get going.”

Considering what Alan Judge has been through in recent years, no one can blame him for that hope.

Not all news on the site expresses the point of view of the site, but we transmit this news automatically and translate it through programmatic technology on the site and not from a human editor.
Eleon2022-03-30
198
Facebook Twitter LinkedIn Pinterest WhatsApp

Pegasus races planned for Gulfstream and Santa Anita in 2024