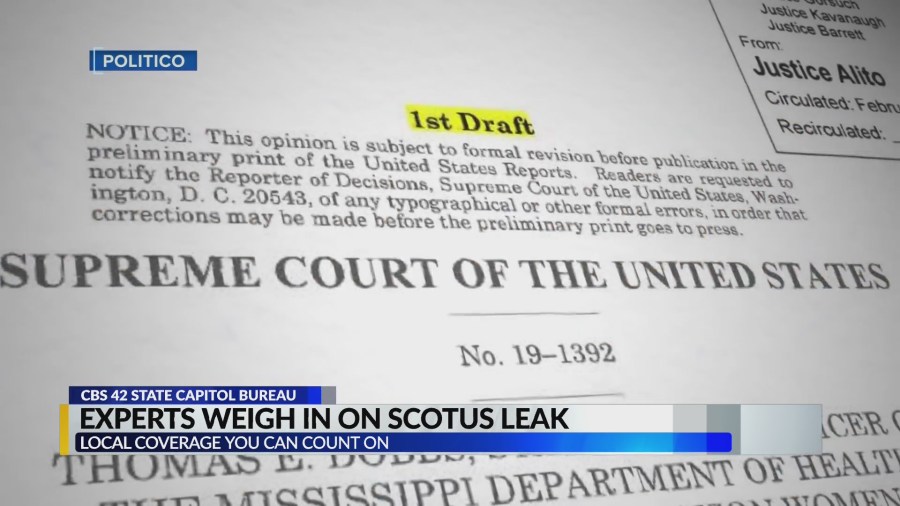 MONTGOMERY, Ala. (WIAT) – As the fallout continues over the leaked draft opinion showing the Supreme Court is set to overturn Roe v. Wade, Alabama legal experts say the leak could have lasting impacts on the institution.

“There have been times when everyone has agreed orally that’s the route we’re going, but then the opinion is written up and it changes the judges’ minds. But leaking a draft is a mistake on so many fronts,” Hansen said.

She says the court’s decision-making is meant to be isolated from public pressure, but this leak threatens that independence.

“Their decision is based on interpretation of the constitution and precedent, not societal pressure,” Hansen said.

Hansen expects the court to say more about the incident after the investigation, but University of Alabama Law School director of constitutional studies Tara Grove thinks the court will keep quiet after that.

“It’s an extraordinarily embarrassing thing that happened in court, and I suspect they would like to keep as much as possible behind closed doors,” Grove said.

Former U.S. Attorney for the Northern District of Alabama Jay Town said if Roe is overruled, the decision would be up to the states.

“The 50 states would be 50 labs that can decide whether or not abortion is legal and then to what extent,” Town said.

Alabama passed a law in 2019 banning abortion that would go into effect if Roe v. Wade was canceled.

Not all news on the site expresses the point of view of the site, but we transmit this news automatically and translate it through programmatic technology on the site and not from a human editor.
Sara Adm2022-05-05
Facebook Twitter LinkedIn Pinterest WhatsApp