The confirmation of the plagiarism he committed in his master’s thesis the Speaker of the House of Representatives, uribista congresswoman Jennifer Arias, unleashed a wave of criticism against him and Internet users, who rarely let any fact go unnoticed, dusted off a video from 2018 in which Arias vehemently questioned public officials who lied.

Through Twitter, the renowned journalist Félix de Bedout used his ironic hashtag #AlwaysHayUnTrino, with which he revived the impetuous pronouncement of the head of the lower house of the Congress of the Republic in which, during the debate on political control against the former Minister of Finance, Alberto Carrasquilla, I defended him tooth and nail by the controversy of the water bonds; a fact of corruption that almost cost the then head of the portfolio his job.

“It is absolutely clear that the minister did not participate in any legislative act that would allow the financial business that was being talked about to take place”, The then representative of the Democratic Center sentenced in an angry tone, a video that she herself published on her profile on that social network.

Later, not only launched a barrage of arguments to defend Carrasquilla, but lashed out at mayors that would have caused the patrimonial detriment in that scandal. At that moment, he is heard launching the statements that Colombians today charge him on social networks for the plagiarism that he committed in his degree work.

“I invite my colleagues -representatives- who cite this debate to do this with the mayors who were the ones who misused these resources. Finally, I want to tell you that lying is also an act of corruption, that twisting the truth is also an act of corruption. To me, my mother told me that cowards are those who twist the truth because they are not capable of confronting it with arguments, “said Jennifer Arias at the time.

Here is the pronouncement of the currently questioned Speaker of the House:

The video was widely disseminated on Twitter and several celebrities such as the Cordovan singer-songwriter Adriana Lucía and the renowned actor Santiago Alarcón They shared the publication and, like hundreds of Internet users, demanded Jennifer Arias to resign from the corporation that she has run since this year after the installation of the new legislature.

“Finally I want to tell you that lying … is also an act of corruption” Jennifer A #RenuncieJenniferArias”, Alarcón wrote.

The harsh taunts to the Uribista representative occurred after the Externado de Colombia University issued a press release on November 22 in which it assures that after conducting a thorough investigation, detected plagiarism in the thesis that Arias presented to graduate from the government and public policy master’s degree that the current head of the representatives presented 5 years ago.

The Externado assured that it submitted the thesis to a computer tool for the detection of plagiarism and This yielded innumerable coincidences with sources or documents published on the internet. It was ensured that in the process, coincidences with texts duly cited, freely reproducible or others not protected by copyright were discarded. Even so, the number of coincidences that do fit among the five possible cases of plagiarism is high.

After confirmation by his alma mater, on his Twitter account, Arias spoke and published: “With the tranquility of always acting under the precepts of the Law, I declare that I have NOT committed any plagiarism”, at the same time that it demanded that the institution of higher education let it exercise the principle of contradiction.

“I ask the Externado University to comply with due process and allow me to exercise the right of contradiction. The judicial authorities will clarify these facts ”, added the congresswoman in her trill. 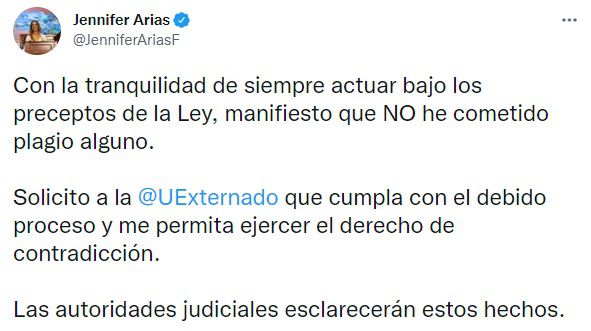 “If Duque turns Green and pro-peace, I am the first to become Duchist”: Juan Manuel Santos

“It seems to me that he is violating the rights of the victims”: Carlos Lozada disavows Rodrigo Granda

Not all news on the site expresses the point of view of the site, but we transmit this news automatically and translate it through programmatic technology on the site and not from a human editor.
Facebook
Messenger
WhatsApp
Twitter
Google+
Posted by Sara Adm In world Last Modified 1 week ago 1 week ago