Barry Robson will aim to restore “thunder” to the Aberdeen team following the departure of Stephen Glass.

Robson took over the reins after Glass was sacked following Saturday’s Scottish Cup elimination at Motherwell.

Many Aberdeen players faced the fury of their fans at Fir Park as they made their way to the stand housing the away support, and Christian Ramirez expressed his frustration at Sunday’s news when he simply tweeted an expletive.

Robson knows the players will feel guilty and suffer in terms of confidence after taking a point in their last four Scottish Premiership games.


The Dons host bottom club St Johnstone on Tuesday knowing defeat could see them looking over their shoulders at the bottom of the table.

Robson said: “It’s never easy when a manager loses his job. It’s hard for him and for everyone connected with the club.

“I felt for him, but the one thing you sign up for when you become a football manager is that it will inevitably happen at some point, which is unfortunate.

“I’ve seen this happen a million times, as a player and as a manager. I just have to try to pick up the players.

“And the thing is, the players know they’re responsible for that as well. It’s about trying to get the club going and getting a decent result on Tuesday.

“Every player should always feel that. I played in teams when the manager lost his job and I felt it when I came back that night. You feel like you let your manager down.

“The only thing you have to do as a player is to bounce back.

The former Dons midfielder added: “When you haven’t won for a few games, confidence can make you look a bit slower than you actually are. Mentally it can be a bit draining.

“What we’re going to try to do is bring some thunder back.

“I told the players, when things aren’t going well, sometimes you just have to work harder, run harder and be a good teammate and try to simplify your game a bit. It’s amazing how far it can take you sometimes.

“Because it’s not always easy to be there as a football player, to be judged. I’ve been there a million times. We just have to try to help them and get a result for the club.”

Robson was brought into the coaching staff by former manager Derek McInnes and has been based at Pittodrie this season, working under the first team.

The former Celtic and Dundee United player says he was not part of first-team operations at Cormack Park but was handed the reins with help from Neil Simpson, Scott Anderson and team captain Scott Brown, who was part of Glass’ coaching staff. at the top.

Robson added that President Dave Cormack “just asked me to pick up the team for Tuesday.”

“We have another game this weekend, we’ll sit down with the chairman over the next few days and see where we stand, and we’ll see what’s best for Aberdeen Football Club.” 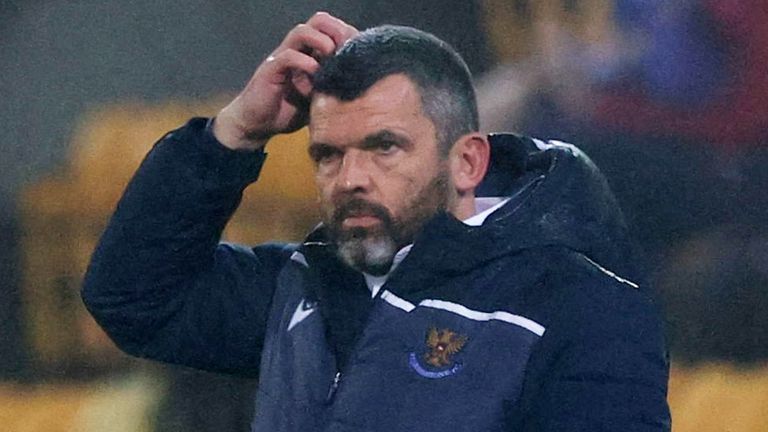 St Johnstone boss Callum Davidson says he is “disappointed” that Stephen Glass has been sacked by Aberdeen, but admits it is a fate all managers know to be a reality.


“The pressure I’m under myself, it’s always sad to see a manager leave.

“I played with Stephen at the Under-21s and I know him well. I know he’s a very good coach, but unfortunately that’s our business.

“I have enough worries at the moment at home, I just need to make sure I start winning a few games.

“It’s a tough business. It’s a thing you know in football if you’re a manager, at some point you’ll probably be sacked.

“If we manage to stay in the league, it would be an incredible achievement, just as much as the double last year.

“Different pressures, different styles, different management. How to deal with players, how to rebuild a team in January with six or seven injured boys.”

Not all news on the site expresses the point of view of the site, but we transmit this news automatically and translate it through programmatic technology on the site and not from a human editor.
Eleon2022-02-14
164
Facebook Twitter LinkedIn Pinterest WhatsApp